I present you with yet another entertaining graphic novel from Dresden universe!

You can find this book on Goodreads and Amazon.

I received this copy from the publisher via NetGalley in exchange for an honest review.

Chicago wizard-for-hire Harry Dresden and his new apprentice, Molly Carpenter, intend to end the havoc caused by a mad sorcerer – one whose ambitions would have the Windy City streets carved out as his own private kingdom. But when the magical upstart enters into an alliance with the notorious mob boss “Gentleman Johnnie” Marcone, will the fast-and-loose Dresden and his young charge survive unscathed?

As usual in Dresden stories there’s a lot of action, magic, some humor and a mystery. The mystery part usually gets solved quite easily and the fighting begins :D. I like the fighting! Spells flying left and right, monsters and demons taking part in it, some mysterious curse, spell or illness that needs to be fixed. All pretty awesome. That’s kind of Dresden’s charm. 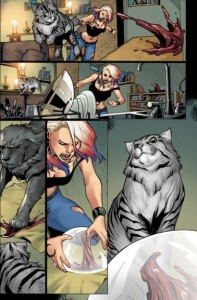 OK, I admit I’m more used to Dresden books rather than graphic novels. That’s why I’m also used to Dresden working mostly alone with an occasional help of someone in critical situations. END_OF_DOCUMENT_TOKEN_TO_BE_REPLACED

"A Room Without Books is Like a Body Without a Soul"