Hello my darlings :D. I’ve got another interview treat for you. This time author of a freshly published book “The Fourth Piece” – Eboni Ardell.

I’m really grateful that you managed you answer my questions in this super busy period. I can only imagine how hard novel publishing might be, but well done! 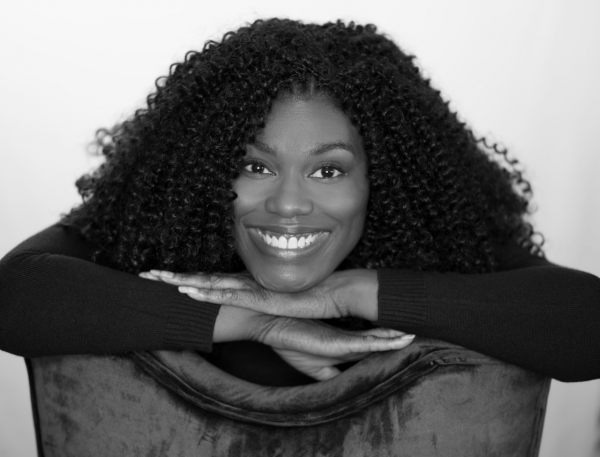 You’ve got your first book published, well done! How do you feel about it?

I feel fantastic! Yesterday (July 8, 2016), my copy was delivered to me while I was at work. The delivery guy missed me and left it in my desk chair. When I saw it, I knew what the package was immediately. I clutched it to my chest like a baby, got a little misty-eyed and walked around the office with it. After some prodding, my co-workers finally got me to open the package. Then I paraded it around and had a co-worker taking pictures

How did the publishing process feel? I’ll give a little TMI here. It was like being pregnant. You’re going to the doctor for check-ups (reviewing cover art sent to you by the publisher), you’re seeing specialists because the baby is having difficulty (the in-house editor has covered your manuscript with red marks, lol), you have to change doctors a few times (cover art from one place isn’t quite what we were looking for, time to try another designer), your doctor tells you your delivery date (THE RELEASED DATE!), you get your ultrasounds (the PDFs of what the manuscript will look like, the eBook, the print cover), you start getting your second opinions (the reviews), you start family planning for future children (writing the sequels), and then.. the baby is born! (Release date.)

To make a long story short: it’s like giving birth… without the gross stuff and less pain.

Your story starts when Vaders are already on Earth, but how did they get here?

Vaders have actually been on Earth for a while, much longer than they claim. Some have generations of mixed families and no longer have any familial connections to the planet their ancestors originally came from. Some might not even know what planet their ancestors came from, and might not even know—after generations—that they are even descended from Visitors (if they look human). Humans born with powers and no known Visitor heritage have even assumed that their paranormal ability is a human trait. It’s not, but how would they know?

Vaders come by ship. There are spaceports for different types of vessels depending on the classifications of the passengers aboard and their end destinations. There is a transit station orbiting Venus (officially known as Amphora) that is similar to an international airport or train station with connecting shuttles and deep space vessels to other orbiting stations in different sectors. There are shuttles to and from Earth: some passenger, some cargo, some private, and some reserved for dignitaries.

Before there were space-ports and official landing sites for space vessels or even airplanes, the ships would land in unpopulated regions in flat areas.

On your blog you’ve mentioned you also write fanfiction, where can we find it? Is it connected to your book in any way?

OMG! Yes, I write fan fiction, which I have neglected…for good reason (PUBLICATION 😀 !). You can find my fanfiction on www.fanfiction.net/~eboni. No, the fanfiction you’ll find there is not connected to my book in any way. However, you might like some of it. Now, mind you, it’s not as clean or polished as my book because with fanfiction, you don’t have an editor going over everything with a red pen ;).

I did, once upon a time, have a story that very much crossed into the universe The Fourth Piece is set in, and I did use some of my characters. I took that story down when I turned my sights to publication.

How come your four main characters are male, I don’t mean it’s bad, I just find it curious as I think it would be easier to work with a character of the same gender.

I love this question, because the answer is simple. The characters are boys because they always have been. These characters have camped out in my head and been the subject of many a crazy plot, play, short story, you name it, since I was in the 6thgrade. Their looks and personalities have changed, their back-stories have changed; their powers have changed, but never their gender. Even when there were six siblings instead of four, they were all boys. I have girl characters too, but it’s not their turn yet.

I’m a weird writer in that I have characters before I have plots. I’ve got a cast of thousands in my head, but no actual stories for them all. I know what I’d like for them to do, but coming up with a plausible and interesting plot for them to star in is the hard part. The Ladreth brothers are my favorite characters, and it means so much to me to see them in print now.

What made you choose aliens and how do they differ from humans?

This question is also easy, lol. They always were aliens—well, half aliens. I love science fiction. I grew up watching Star Trek, Star Wars, Thunder Cats (Oh, I dated myself with that one) Transformers, and Rainbow Brite (Hey, if I’m gonna date myself, I’m going all the way.) I just have a hard time writing things that aren’t science fiction or fantasy, and I’ve always been intrigued by space travel and what else is out there.

How do aliens differ from humans? It depends on the aliens. Some don’t. Some look strange to us due to adaptations to their planetary environments. Some have abilities. I guess the way they differ the most is that they know more. Their races are older, have deeper histories, religions, governments, morals, and some are more technologically advanced, so they might seem smarter.

In The Fourth Piece, the boys meet full-blooded aliens, or Visitors (the politically correct term) and they can relate to all of them. So, aside from a few physical differences, Visitors aren’t so alien (ha-ha) that you can’t make friends with them.

Do you have the whole series planned or are you writing as it goes?

I have an idea in my mind about how the series is going to go and I have a very loose outline. I know what the outcome of each book needs to be, and I have certain scenes and key moments that must happen. I can’t really do a hardcore outline, because I find them to be a waste of time. As I write, the characters might decide they don’t want to do what I had planned, and they go on their own tangents that are more interesting than what I had blocked out anyway. Or, I just end up with a bad case of writers block that I can’t break until I delete the chapter I’d been trying to force and work with something new.

Tell us about an event from one of your characters past, something that wasn’t described in a book.

Hm. When Lawrence was twelve, he and his friends snuck out of the house after midnight to head out to a dry ditch to do stunts on their bikes. Lawrie fell off his bike and broke his collarbone. Luckily his friend Jeremy was there to call 9-1-1, because the other kids they were with ran away.

City, beach, lakes or mountains – what’s your favorite vacation spot and why?

City. You’re gonna laugh, but I’m not too crazy about outside. Plus, I crave internet and can’t be without my laptop for more than a few hours (what if I want to write???). Also, I just like having a variety of things to do.

Look at the sky – what do the clouds show you?

They show me an omen. Omen: This weather is going to make your hair frizz, pull up your hood!

You’ve just stumbled upon an open portal, what do you see and will you go through it?

On the other side of the portal, I see Thor (Chris Hemsworth) in full costume staring back at me and calling me “Jane.” Yes, I go through!

And make sure to check out the book! I’m reading it now, so the review will come [hopefully] soon, but I can tell you for now I like it :D:
The Fourth Piece (Order’s Last Play #1)

4 thoughts on “Interview with E. Ardell”

What's on your mind? Cancel reply

Misadventures and antics in the gaming world

A Room Without Books is Like a Body Without a Soul